I am writing to show you how Nicaraguans celebrate Los Agüizotes in Masaya. 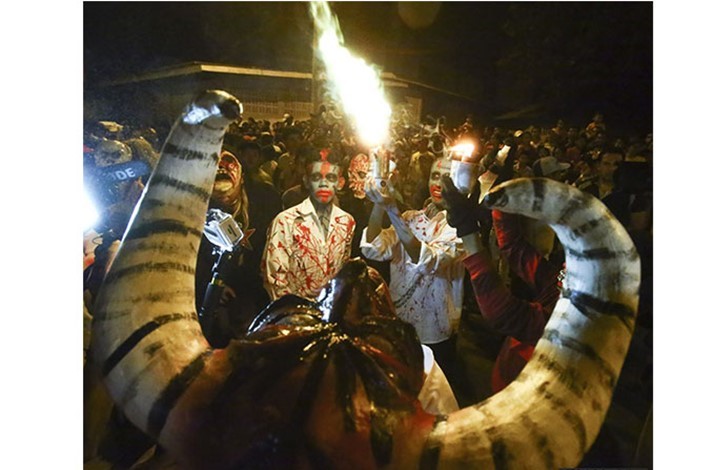 Dozens dress like devils and ghosts to celebrates their ancestors.

Nicaraguans celebrate their ancestors by holding the annual Los Agüizotes festival in which adults and children dance and parade through the most important streets of the city of Masaya.

The festival takes place on the last Friday of October. It starts at sundown, when people dress like ghosts and, using masks, dance through the streets accompanied by music and fireworks.

Every year, dozens of tourists, both Nicaraguans and foreigners, arrive to Masaya to attend the festival, which also attracts a lot of travelers, amazed by the hundreds of candles that are lit by participants.

Los Agüizotes are a series of characters such as men without heads, witches, devils, and ghosts that are part of Nicaraguan folklore and tradition. The festival gets its name from the word “güis,” a local bird which is believed to announce death.

The days before the Los Agüizotes celebration, local craftspeople rush to meet the large demand for devil and ghost masks. 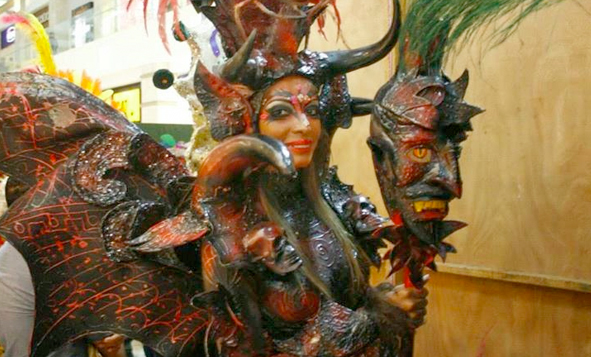 Since November 3rd, 2010 by the presidential decree 1584/2010 signed by the former president, Argentinians celebrate October 12th as the day of “Respect towards Cultural Diversity.” Argentinian government, reached that decision after considering and reflecting upon the human rights expressed in our national Constitution.

Before, October 12th,  commemorated Columbus “discovery of America” in 1492 which later resulted in the famous Encuentro de Dos Mundos and provoked  a drastic change in the world economics and America’s demography. Numerous lives changed and many cultural practices disappeared.

Nowadays, commemorating the day of Respect towards Cultural Diversity, Argentinians are looking to promote from all the public social institutions the reflection upon our history, encouraging the dissemination of Human Rights specially among the few Indigenous people, as stated in our Constitution, about equality and granting respect towards identity and the right to a bilingual and intercultural education.

It is a day to remember, reflect and work on the well being of all cultures and specially to increase tolerance towards diversity. Argentina has done its bit, and hopefully, it can encourage many other countries to do so as well and maybe in a not so distant future make a better world.

PS: Enjoy and reflect upon the following video and song of “Calle 13”.

I am from Nicaragua. My country is located in Central America. Nicaragua is known as the land of lakes and volcanoes for its 50 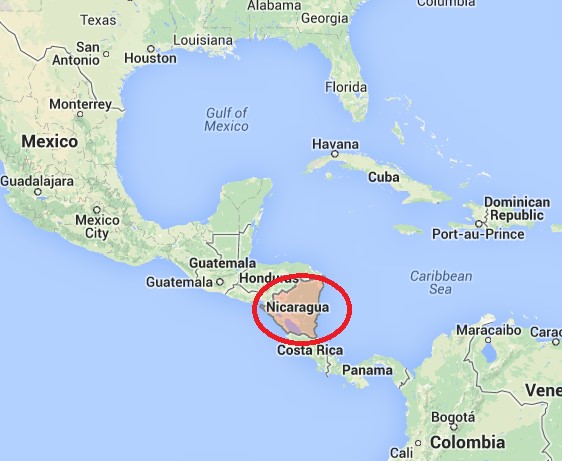 volcanoes, 7 of which are active, and its famous Lake Nicaragua. It is the only fresh water lake in the world known to have sharks. 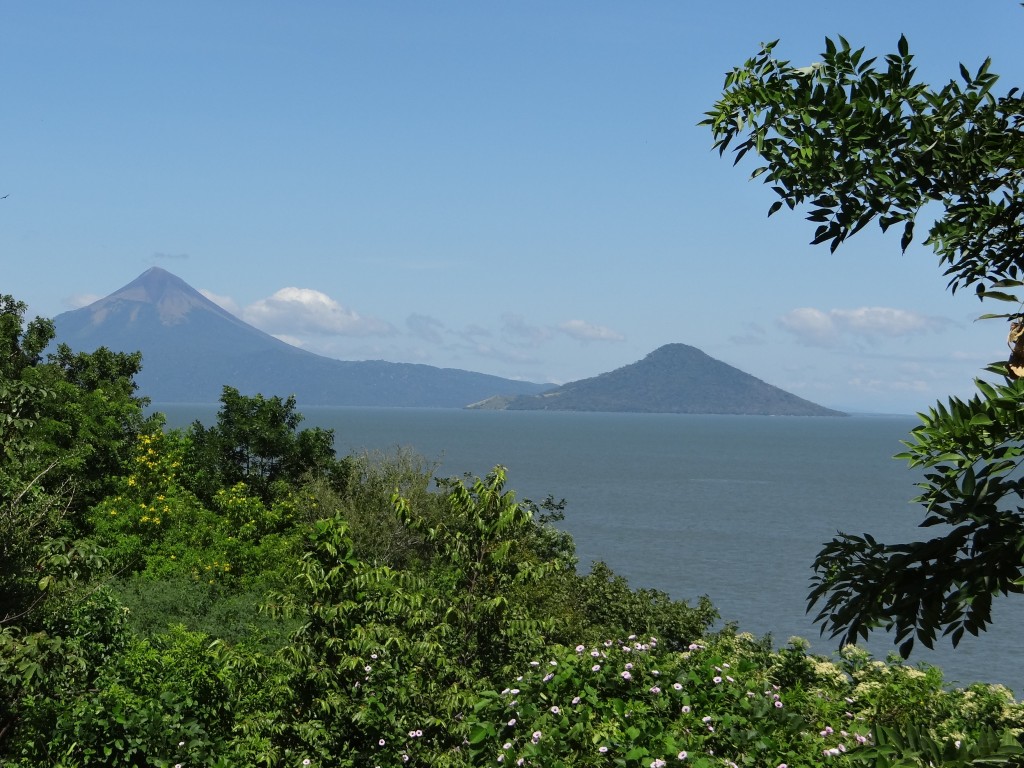 You can also participate in a lot of activities at the volcanoes. Visitors have the ability to climb active volcanoes such as Momotombo Volcano. 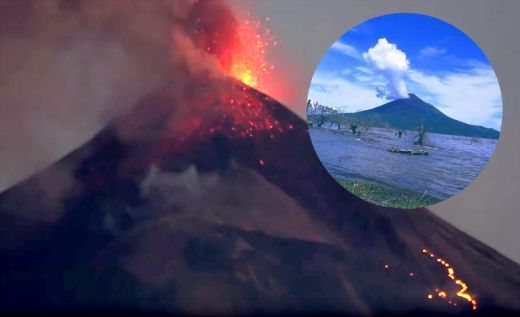 You can also climb dormant volcanoes and peek over in to the crater of a volcano such as Mombacho volcano. 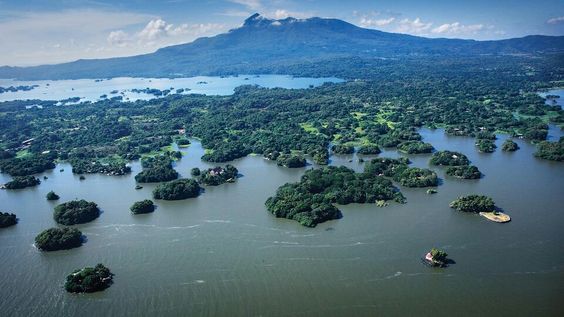 Also, Nicaragua has volcanoes where you can swim in crater lakes such as Laguna de Apoyo.

You can also go sandboarding on Cerro Negro Volcano.

Masaya Volcano is constantly erupting. It is the only volcano in the western hemiphere where you are able to drive to the rim. You are also able to walk up several sets of stairs to look down into the crataer of the volcano. 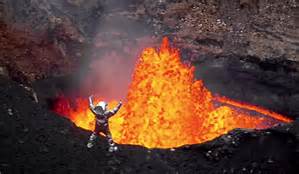 I hope to see you soon either during my tutoring hours or at the other activities organized through the LLC.

“Mafalda” is a famous and witty Argentinian comic that deals with issues about the society, education, politics, family life among other topics of general interest.

Over the years, the little black haired girl who doesn’t like soup and dreams with an ideal world has reached the hearts of many people around the world.

(Translation: “Soup is to childhood, what consumerism is to democracy!”)

(Translation: “It may be sad Raquel, but in moments like this one ‘MAMÁ’ is just a pseudonym “)

But who is the master mind behind Mafalda? That is  Joaquín Salvador Lavado Tejón, better known as QUINO. He was born and raised in Mendoza Argentina and currently lives in Guaymallén (a city in the province of Mendoza). At the age of 84, he’s celebrating Mafalda’s 52nd anniversary. 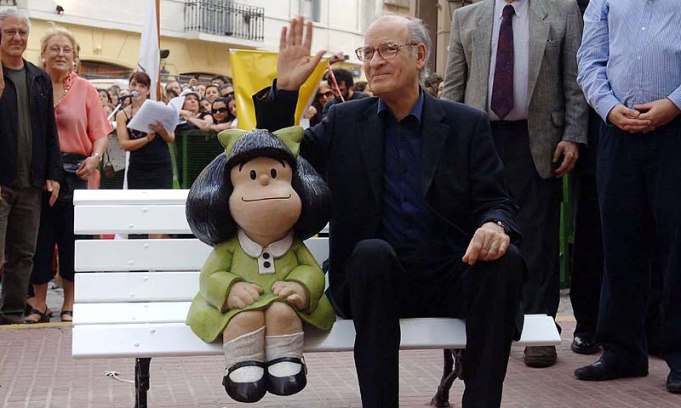 However, Mafalda is not alone. Her father, Quino, gave her a family and a bunch of friends to play and share her innocent and witty perspectives of the world:

-Felipe: a 7 years old boy who loves crosswords and the Lone Ranger but hates school, getting up early and doing homework.

-Manolito: a 6 years old boy who loves money and Rockerfeller and hates the Beatles, discounts, and hippies. -Susanita: a 6 years old girl who loves marriage, the idea of having children, and maybe Felipe. She hates divorce, poor people, and uncomfortable ideas.

-LIBERTAD: (FREEDOM) is a little girl older than she looks. She loves revolution and culture, but she hates complicated people, why can’t everyone be simple and honest?

-Guille: he is a baby and Mafalda’s little brother. He loves writing on the walls and having his pacifier on the rocks.

-Miguelito: is a 5 years old  boy. He loves abstract, useless speeches, and jazz.

-Mafalda’s parents: Her mother mamá or Raquel and her father papá love each other  deeply and love their children. They hate cooking anything but soup and the cost of life.

I hope you enjoy Mafalda’s ideas as much as I do. She dreams with an ideal world and if we work together it is not just a utopia.  Let’s be more like this curious, innocent, lively, rebellious, and highly ironic girl.

Have a nice weekend! 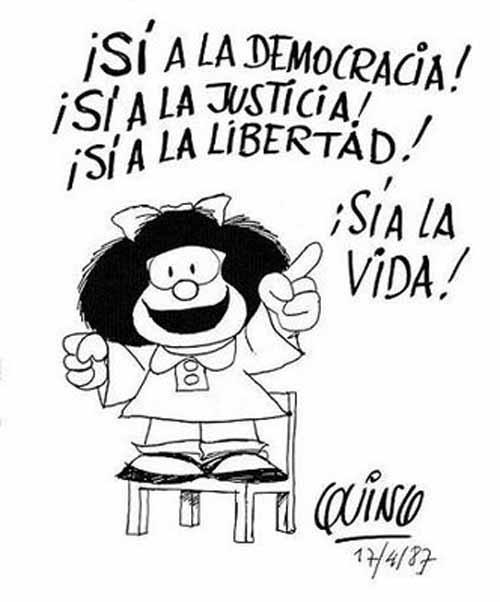 Hi everyone! How are you? I’m Fernanda Oliver and I come from a little town called Malargüe in the province of Mendoza in the beautiful country of Argentina. This year I will be one of the Spanish Language Assistant!

Here are some pictures of the place where I live. I hope you enjoy nature because that’s what Malargüe is about! However, it is not always snowy and cold. This time of the year the environment gets warmer, flowers star to blossom, love is in the air and you realize that Spring is coming!

Along with spring, we get to celebrate STUDENTS’ day September 21st!  On this day, Argentinan students don’t attend classes and they spend the day on a picnic or camping with friends! Here are some pictures as well:

They get together and play the guitar, play games like “metegol” or just share a mate with friends. 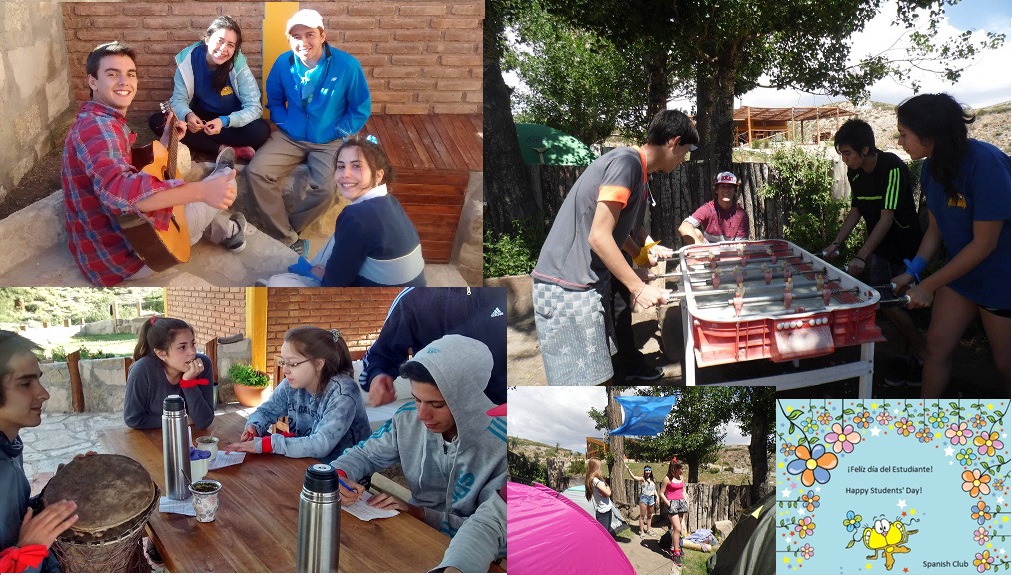 They even have their own song “El Estudiante” by the ’80 rock band Los Twist:

Round two! It’s the season for Guacamole and Chocotorta!

1- Beat four spoonfuls of dulce de leche with the cream cheese until mixed (if you use sandwich cookies, don’t throw the filling away. Add it to the mix!)
2- Mix the milk and cocoa. Soak the cookies in the mixture.
3- Layer the dulce de leche mixture in a pan with the chocolate cookies. Continue altering layers of dulce de leche and cookies. You might want to put grated chocolate on top.
4- Place in the freezer for a few hours.
5- Listo! Ready to eat.

Hey everyone! We hope your summer break is going well. If you have some extra time on your hands and you feel like trying some new, you should give these recipes a go (Spanish club tested, Spanish club approved!)

Preparation
1. Rinse shrimp and put it on a bowl.
2. Add lime juice (8 limes) to the shrimp and refrigerate for an hour.
3. In another bowl put the crab meat, it needs to look like shredded crab meat and add lime juice (2 limes).
4. After an hour, shrimp should be ready. Rinse any extra lime juice.
5. Combine shrimp and crab meat.
6. Then add the tomatoes, cucumbers and cilantro.
7. Add 2 cups of Clamato, and mix. You can add as much as you want.
8. Then grab a tostada and put ceviche, avocado, and salsa.

Preparation: there are many recipes available online. I (Lucía) decided to go for the one that best resembles my grandma’s. You can find it here:  https://pipinthecity.wordpress.com/2007/02/25/argentina-101-part-iii-dulce-de-leche-basics-alfajores-de-maizena/

(These are just some pictures, check out our Facebook page for more!) 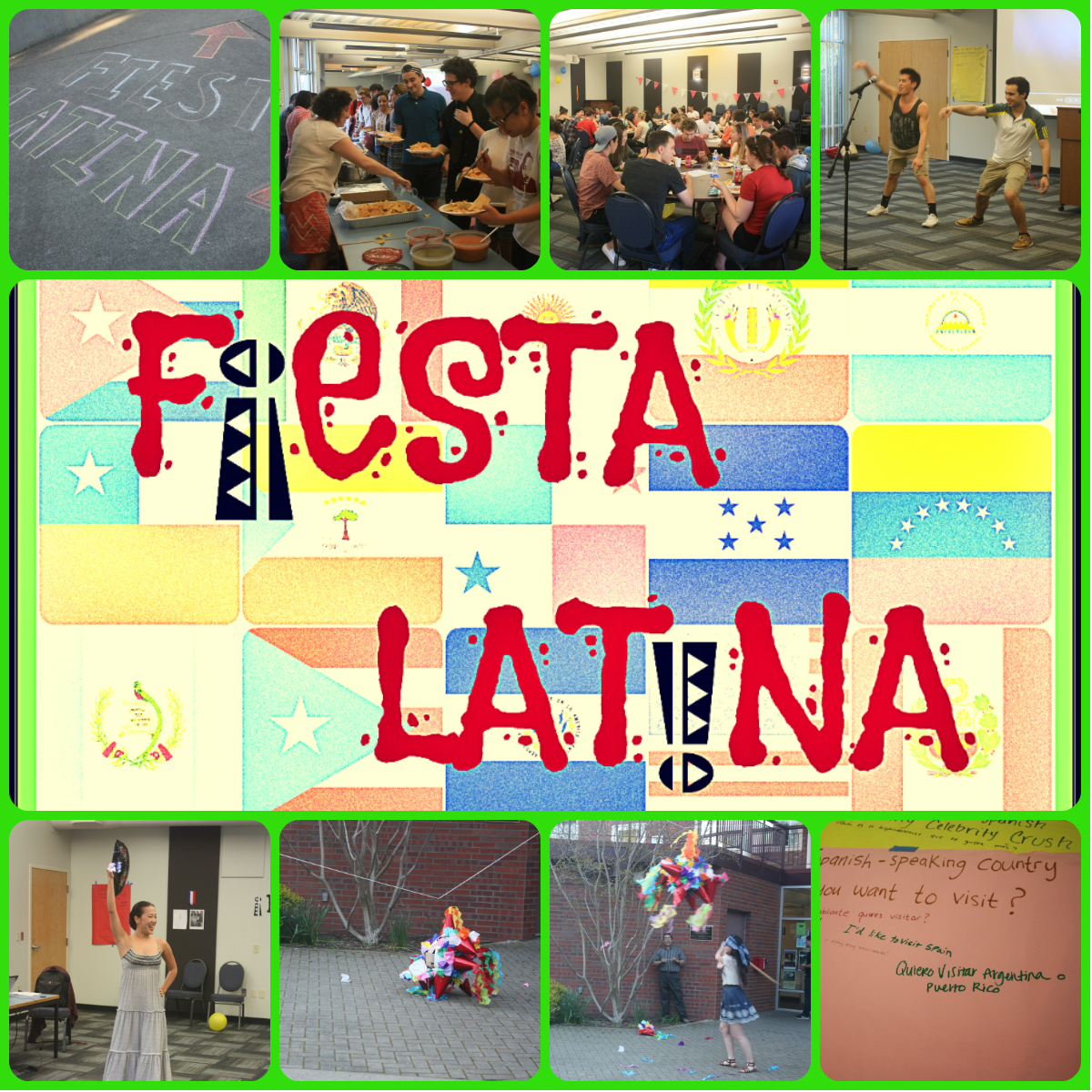 ¡Hola a todos! I want to dedicate this first November post to all the cool activities Spanish Club has been organizing this fall semester. I also want to thank all the club members and students that take time out of their busy lives to join us every Tuesday to participate, exchange ideas and have fun! Events are open to everyone, so drop in any time!

October kept me busy with the two-part Spanish pronunciation workshop. This was the first time I had devoted that much attention to Spanish sounds and speech patterns. It was a fun and interesting process for me, I hope that the ones who attended the sessions got something from them!  Game night was also great fun, but I must confess Salsa Night is my favourite event so far. There’s usually a follow-lead imbalance in social dancing gatherings, so seeing people show up and enjoy themselves was great! (Yes, I say “seeing” ’cause I spent most of the class taking pictures… I did give the casino round a try towards the end, though!). Special thanks to Professor Michael Woods for being our salsa instructor for the night (rumor has it that a salsa club is in the making!)

The semester is soon coming to a close, but there are still some meetings you can take part in. Next Tuesday, November 17th is Cooking Night! Come treat yourselves to a very special Mexican-Argentinian meal at the LLC.

Lastly, you can “like” us on Facebook so that you know more about our weekly meetings and activities. Here’s our page: https://www.facebook.com/willamettespanishclub/

Hope to see you around, 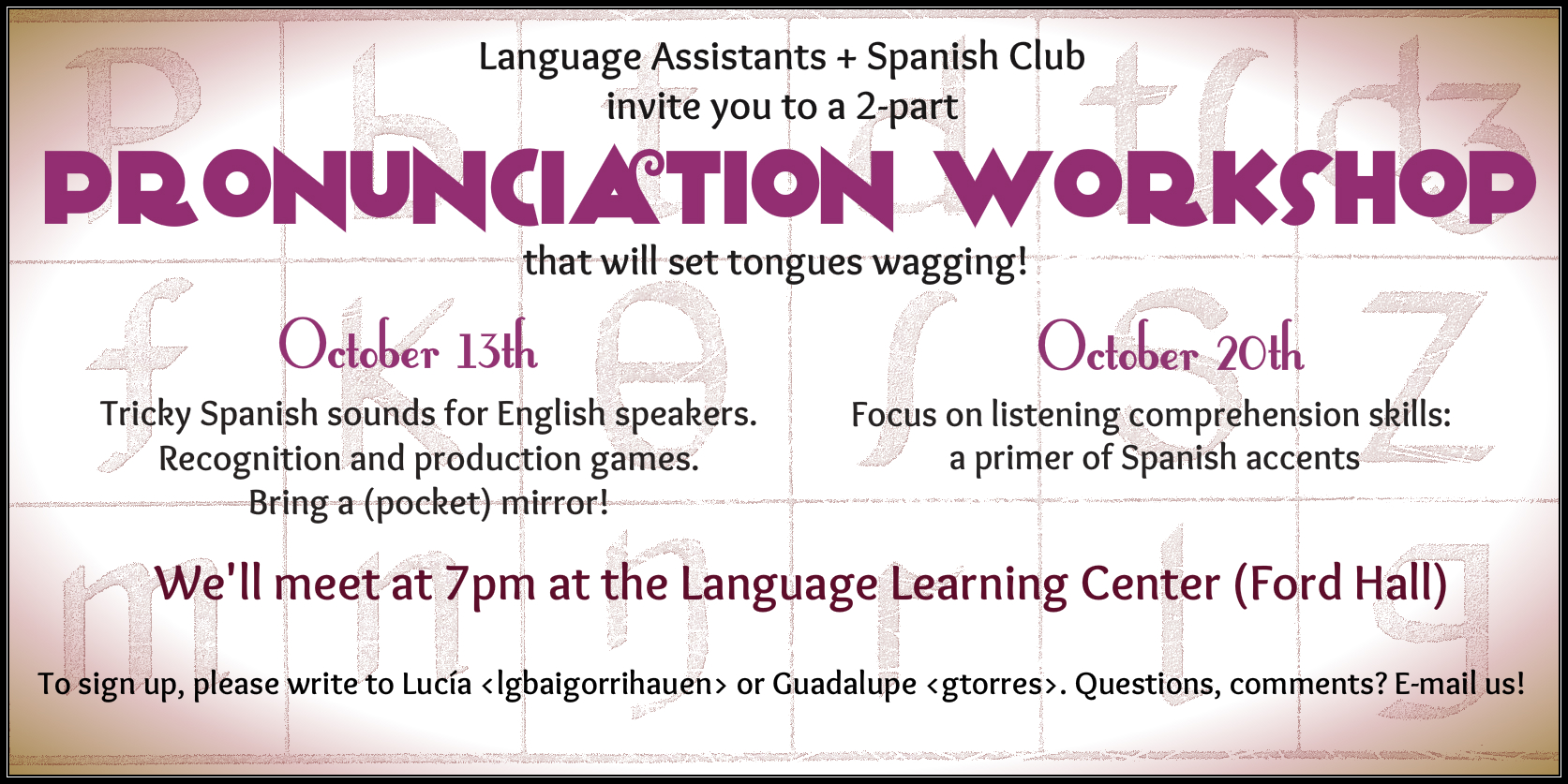